In June 2010, Leeds signed 23-year-old Kasper Schmeichel on a two-year deal following his release from Notts County. The son of Danish and Manchester United legend Peter Schmeichel, Kasper arrived at Elland Road with huge potential. Having failed to get his chance at Manchester City, he excelled in League Two for Notts County, keeping 20 clean sheets in 42 games as they gained promotion to League One. But keen to progress his career further, Kasper departed to join Leeds, who themselves had just gained promotion to the Championship under Simon Grayson.

At the time of the transfer, Grayson described the deal ‘a major coup’, with Schmeichel reportedly turning down a number of Premier League sides to join Leeds. The Whites offered him a better chance at regular first-team football and as it turned out, he would play almost every league game for United that season. He wasted no time in making his mark at Elland Road and was named the league’s Player of the Month after a string of impressive performance in the first few weeks of the season. Leeds were tipped to struggle having just come up, but they performed above expectation, through the help of Schmeichel in goal, and around the festive period found themselves in the Championship’s top two. They also caused Arsenal problems in the FA Cup, drawing 1-1 at the Emirates after a Schmeichel masterclass, before losing the replay 3-1 despite more heroics from the Leeds keeper who was named the player of the 3rd round.

It was a season that promised so much for the Whites, however, despite spending all of 2011 in the Championship’s top six, they dropped out four weeks before the end of the season and missed out on the playoffs. It was a bitter disappointment for Schmeichel and his teammates, but it was a progressive season that brought plenty of positives on a personal and team front for the Dane. After the season, manager Grayson praised his goalkeeper describing him as ‘outstanding’, while also adding that he planned to keep the core of his team together in a bid for promotion the following season. Unfortunately, that view was not shared by the hierarchy at Elland Road.

Chairman Ken Bates was keen to offload some of Leeds’ highest-earning players in an attempt to reduce the wage bill. It was a summer that would see manager Grayson lose the majority of the squad that helped the club rise from the doldrums of League One to a promotion-chasing team in the Championship. Despite only joining the club a season earlier and only being one year into his two-year deal at the Whites, Schmeichel was one of the many players told they would be leaving the club. This came much to the surprise of the Leeds’ players, fans and the man himself. Kasper was arguably Leeds’ best player throughout the 2010-2011 campaign, showing all the agility and athleticism his dad became renowned for, but when Leicester came forward with a feeble £1 million offer – a fee that was well below the player’s valuation – the board at Elland Road decided that was enough to allow their no.1 keeper to depart. 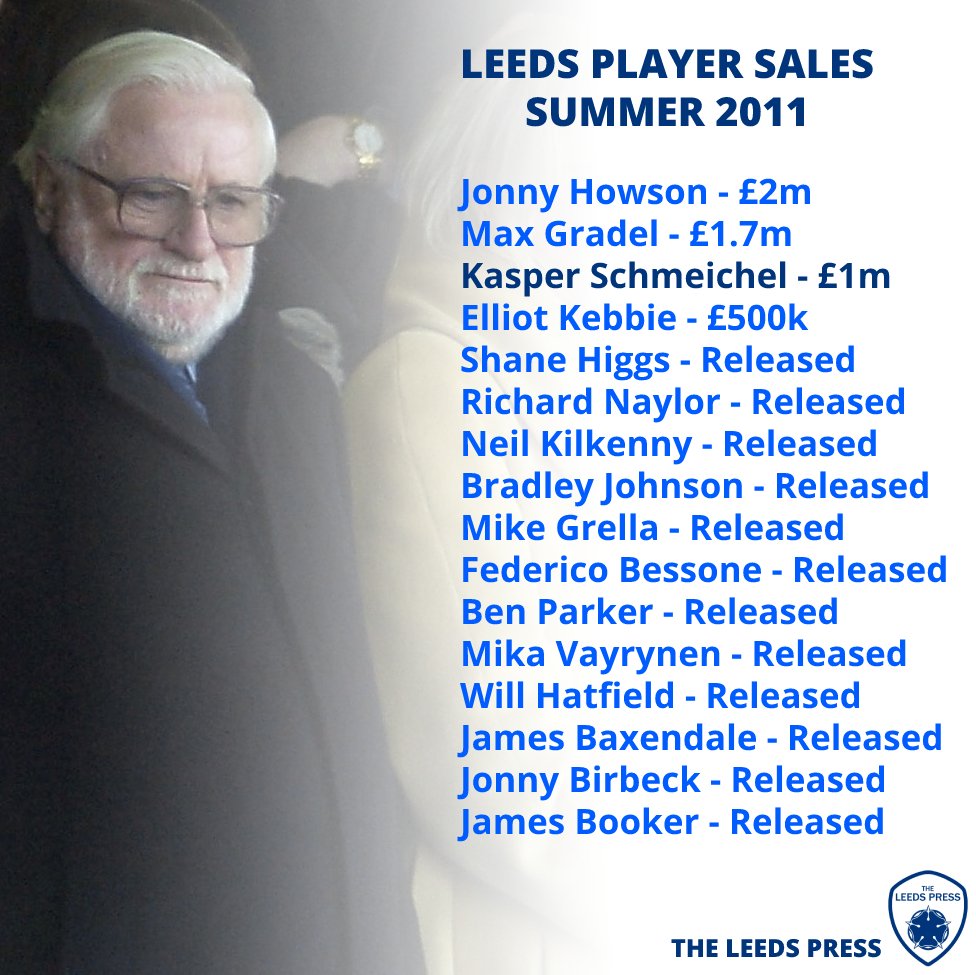 At just 24, many predicted Leeds would look to build a team around Schmeichel in their pursuit of the Premier League – what happened though was quite the opposite. Grayson’s side had shipped a whopping 70 goals despite their seventh-place finish and it quickly became evident who owner Ken Bates blamed for that. Kasper himself wanted to stay at Leeds having moved clubs twice in two seasons, and the transfer to Leicester was somewhat of a sideways move. The Foxes had finished three places below Leeds in the previous campaign, but the board at Elland Road were keen to offload despite their keeper’s wishes. Bates and co. got the money they wanted and went about finding a cheap alternative, which they did in form of Preston stopper Andy Lonergan for £200k. Though Lonergan was far from a bad keeper, he turned out to be a major downgrade on Schmeichel and combined with the other players who had departed in the summer, Leeds were a shadow of the promotion-contending team from the previous season.

Meanwhile, at Leicester, Schmeichel would have to be patient, but within a short amount of time he became one of their key players as they stormed to Premier League status within three years of his arrival. Kasper became Denmark’s no.1 between the sticks along the way as he excelled in the top flight of English football. After playing a huge part in keeping the Foxes up, the following season went down in history as he played every game in Leicester’s Premier League title-winning campaign. Schmeichel conceded just 36 goals and was the rock behind arguably the greatest achievement in modern football history as the 5000/1 rank outsiders achieved the impossible. While Kasper was achieving greatness, Leeds went through goalkeepers like hot dinners and spent years struggling in the middle of the Championship. The decision to sell him for just £1 million quickly became one of the worst decisions in the club’s history.

Despite Grayson being the manager at the time of Schmeichel’s sale, nearly a decade later he opened up on the deal that took Kasper to the King Power Stadium for pittance. “Even at the time, that wasn’t a good deal to sell a very good goalkeeper,” Grayson told The Athletic. “He had a year left on his contract and the club signed him for nothing, so the club looked to recoup some money on him. It was a business deal that I wasn’t overjoyed in doing. He signed a two-year contract and after the first season, the people above me made the decision to sell him because they didn’t want him to walk out on a free. There were a few players at that time who began to be sold by the people above me. That was the decision and it wasn’t anything to do with his ability. Yes, I had to make out at the time that, sort of, we were looking for more competition. People realised that the people above us were starting to sell players, although we went down the line of saying that we were looking to improve the squad.” 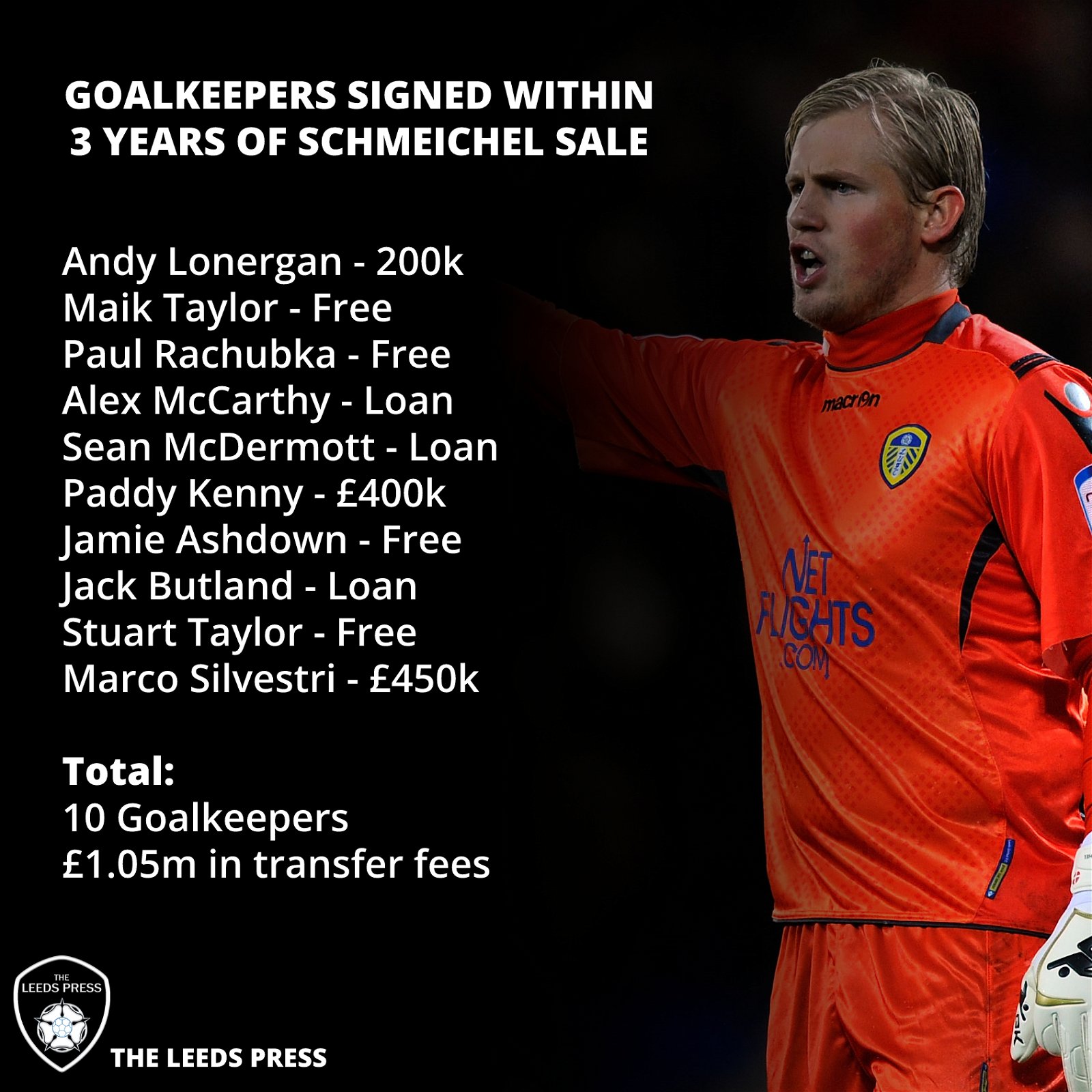 As it turned out, in the time it took Schmeichel to rack up nearly 150 appearances for Leicester and help earn them a place in the Premier League, Leeds went through 10 goalkeepers and spent more than the £1 million they received for the Dane. They also amassed more in wages and loan fees in a bid to find a consistent figure between the sticks at Elland Road, which further highlights the craziness that went on behind the scenes during the Bates regime. Though there were many a transfer deal that Leeds clearly fell on the wrong side on during the early 2010s, you would find it hard to find a worse deal from the Whites point of view than that of Kasper Schmeichel. Still going strong for Leicester now in the Premier League at the age of 35, he has recently passed the 400-game mark for the Foxes, winning the FA Cup last season and being named club-captain head of this campaign. On the way to becoming a Leicester City and Premier League great, it works out that Leeds have recouped less than £100k per season for Schmeichel, which without question represents arguably the worst transfer business anywhere over the last 10 years.