Yesterday, despite the size and scope of the FA Cup Final, the most controversial footballing moment of the day perhaps occurred at Turf Moor as Dwight McNeil and Ezigan Alioski got on the wrong side of one another. The former has been accused of spitting on the Leeds man whilst Burnley have made a formal complaint to the FA over a gesture made by Alioski. But how did social media react?

There perhaps isn’t a right side in this debate with McNeil apparently spitting on Alioski. Meanwhile, Alioski may have produced a racist gesture to taunt the Burnley winger.

And unsurprisingly, Leeds fans are now fearing the worst for Alioski.

Good win and I’m happy, but not happy if Alioski gets a 10 match ban and a fine!

Some, however, felt Burnley made an unnecessary complaint. They believed Leeds were well within their rights to make a complaint of their own but didn’t because the incident doesn’t need to be taken any further.

Some people are complainers, others are not, it certainly doesn't follow that whoever complains first is in the right. When the FA look at this in the round one suspects McNeill might have more questions to answer than Alioski.

One fan laughed off the incident likening it to the gesture of a child.

Here he is! "racist" #alioski #lufc. What a joke. Pulled a childish face after being shouted at and spat on whilst lying prone. pic.twitter.com/rh8dTT9BVX

Others felt he was simply trying to make light of the situation.

Alioski was trying to make light of the situation, "handbags at dawn" style …. come on guys it certainly wasn't a racist taunt!

Alioski mad as a bucket of frogs always has been. Gets up off the floor sticks his tongue out at player then pulls a childish face……..after being spat at. All of a sudden social media say he’s racist! wtf?!? pic.twitter.com/qyeGIRC7mj

On the other side of things, some Burnley fans felt there was no spit. Instead, they believed McNeil was simply telling him to stop being soft.

Others believed that the whole debacle should just be dropped.

Think we all need to drop this McNeil and Alioski thing. There was no spit and no racial gesture #twitterclarets

Racist taunt? What a load of nonsense. A sad man full of sour grapes, trying to deflect from his own cowardly actions and defame an innocent man, by playing a non-existent race card. Shameful. 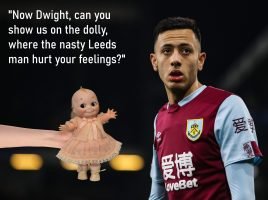