It would be no understatement to say that Raphinha has carried Leeds United in 21/22. The Brazilian forward has dominated every relevant stat this season. Not only is he bagging the Leeds’ player of the season award by a mile, his performances have been so huge that top Champions League clubs like Barcelona and Bayern are now strongly linked to the 25-year-old, who is in the prime of his life.

In this article, we’ll analyse the one-army for Leeds this season – Raphael Dias Belloli 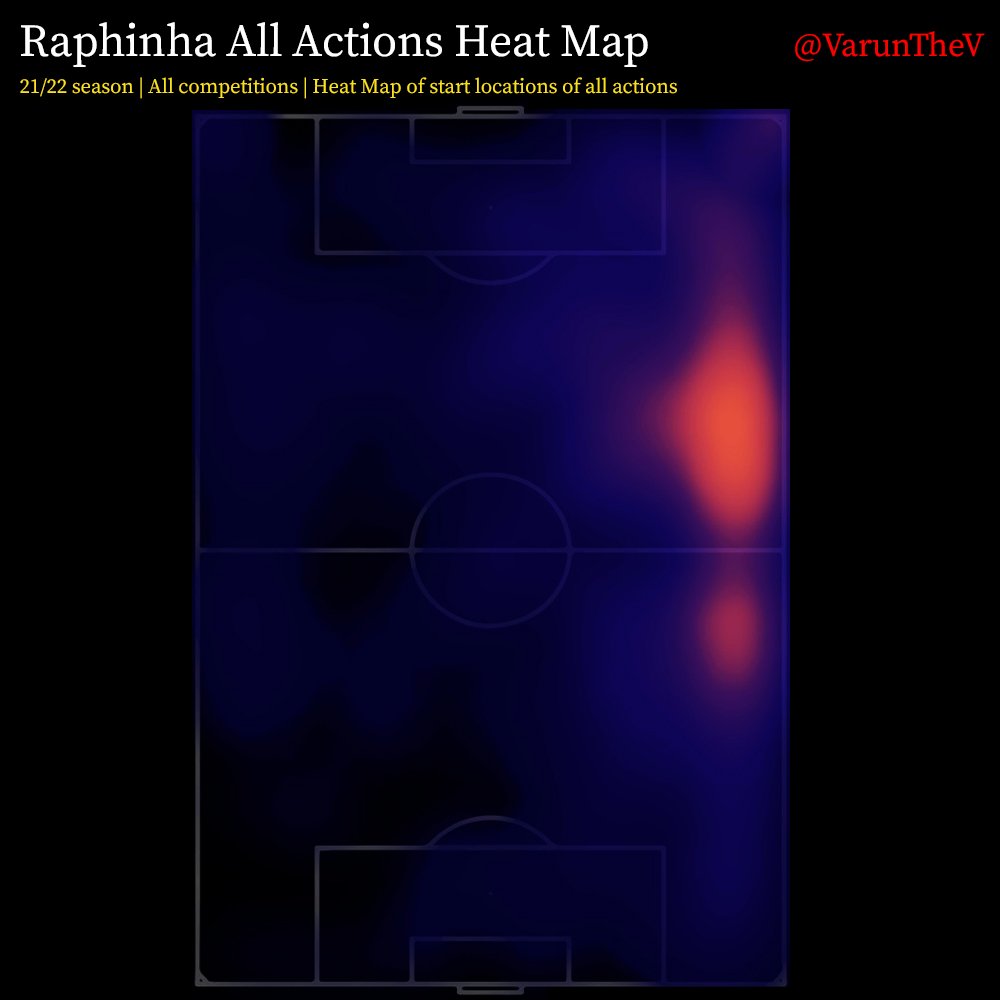 Raphinha’s heat map conveys exactly what he is – a touchline wide winger. It’s actually a very in-demand profile and one of the reasons why Raphinha is being chased by top clubs. In general good left-footed right wingers are rare compared to right-footed left wingers. On top of that the nature of many left wingers being narrow creators and combining with central players means that managers prefer a right winger who can stretch width. For example, Barcelona’s left half space is dominated by Depay, De Jong, Pedri, Torres, Aubameyang, Fati and Gavi which makes play concentrated on the left side. Which gives a wide winger like Dembele the chance to run at players when play switches.

This is exactly what Raphinha does and probably why Barcelona are favourites to sign him. For Leeds, Raphinha has to track back a little as shown in the heat map, but largely speaking he is the main outlet in attack. He receives the most passes and progressive passes as well, as seen in the stat attack at the start of this article. Raphinha’s clever movement out wide ensures he always gets the ball in good areas and then has the ball control and movement to cut into dangerous areas and dribble, score or assist in equal measure. Movement wise, it’s a very valuable profile and why he has found great success in the League.

As mentioned before, Raphinha is Leeds’ top shot taker and goal scorer as well. For the right winger in the team, who starts from a wide position, Raphinha’s ability to move into good areas to score from both with the ball and without, is tremendous. Raphinha is in the top 20 percentile in the league for both shots taken and expected goals (xG), even after playing for a club that was in a relegation scrap till the last day. This, in itself, speaks of his skill when it comes to getting into good areas and shooting. 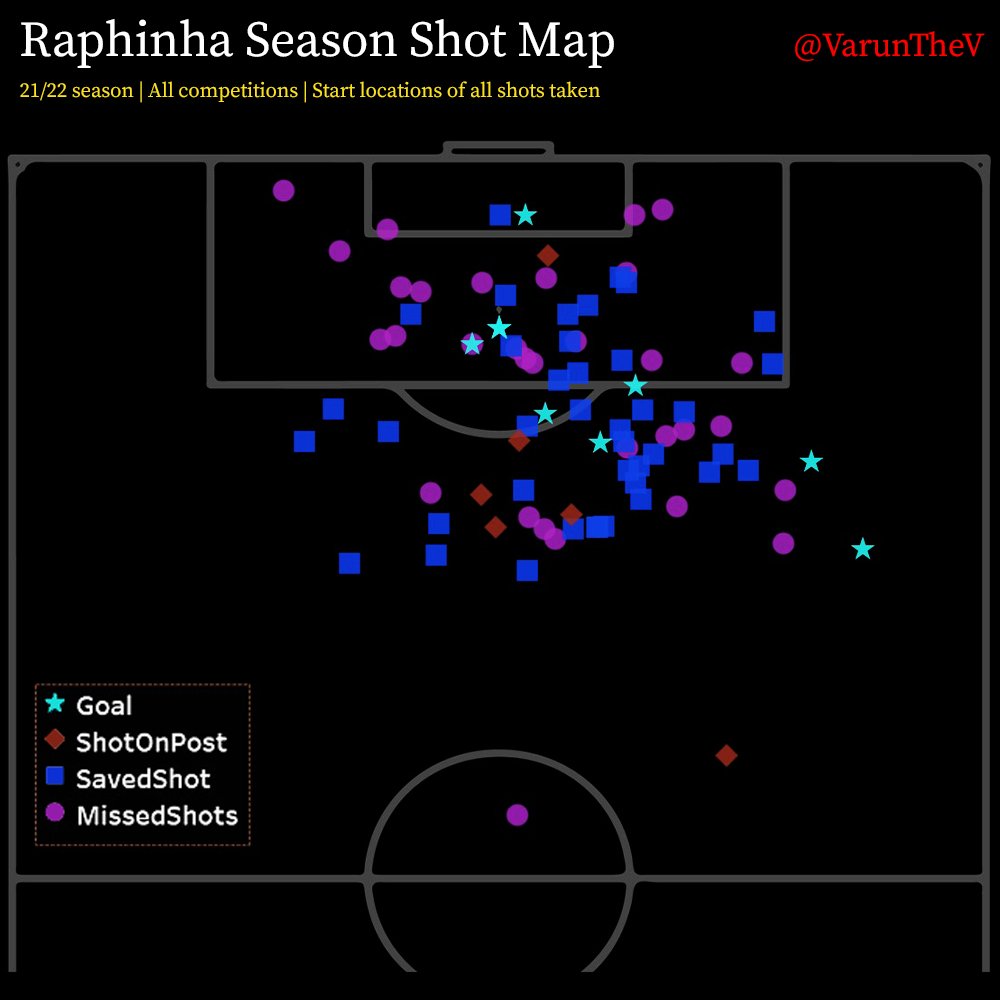 If we look at his shot map, his right-sided shot-taking is visible, especially those attempted from the edge of the box in the right half-space. But he also has many shots from central areas and inside the box as well, which makes him different from the wingers that just take shots from distance from their preferred angle. Raphinha actually has the movement to get into the box regularly like a striker and fashion himself high value shots from central areas.

Another aspect is the number of saves he forces from his shots. He often gets shots on target, showcasing his technique and ability to hit the target. Not only is he a good mover to get into good areas but he also has the technique to hit the target regularly. It’s a deadly combination that very few attackers can claim to have.

If Raphinha’s wide movement and goal-scoring painted him as a dribble–and-shoot merchant like many wingers often are, it wouldn’t be further from the truth. Raphinha has excellent passing technique. He is a strong creator in addition to being a good goal-scorer. Only 6 players in the Premier League have created more chances than Raphinha with 5 of them being the main creators of the top 5 teams and James Ward-Prowse jumping ahead thanks to a lot of set piece creation. It wouldn’t be wrong to call Raphinha the best creator outside the top 6 in the Premier League. 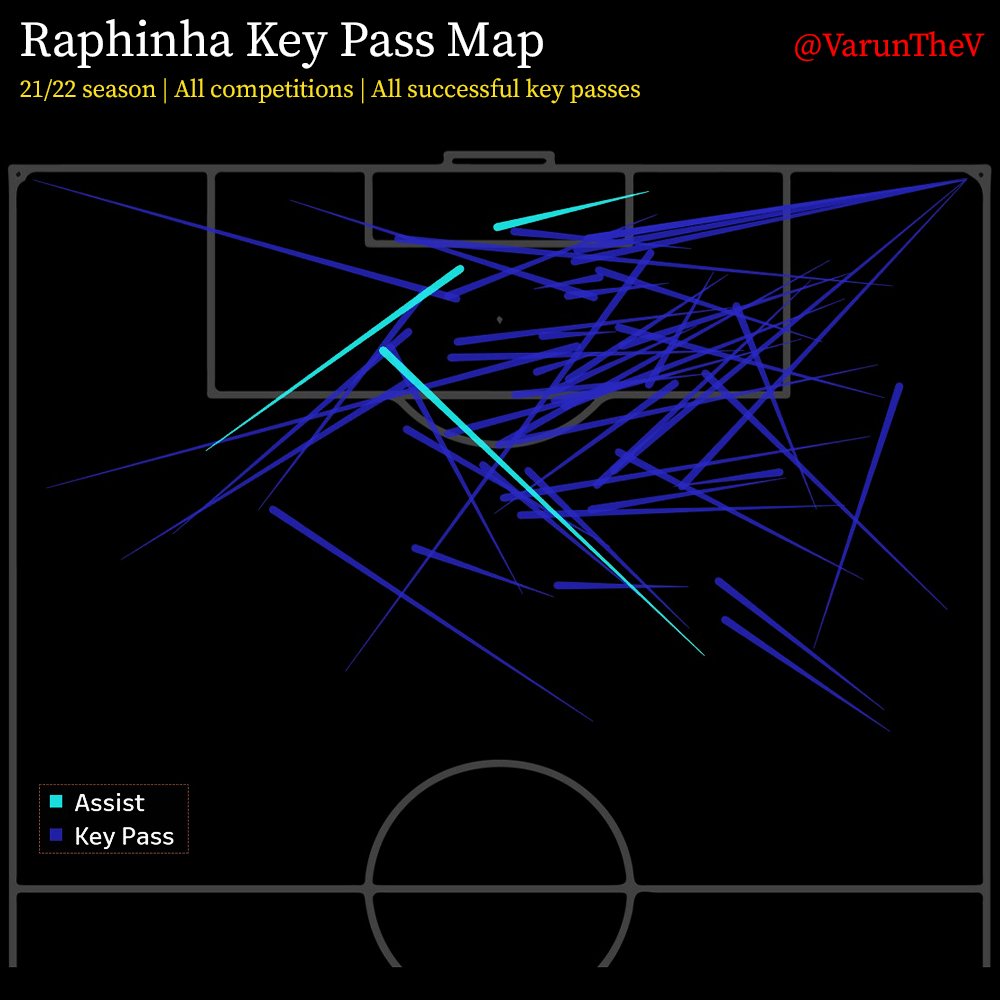 Once again, most of his chance creation comes from that right wing and half space area. What is very clearly noticeable are the amount of short cutbacks from the right side into dangerous central areas. Raphinha is very adept at picking out those smart short passes that find a teammate. It has been Leeds’ misfortune that there was no consistent central threat this season to finish those chances. With Bamford’s injury, James attempting to play striker which he clearly cannot and Gelhardt being too raw for a starter role – there was no finisher for Leeds to capitalise on Raphinha’s creation. The result sees Raphinha end the league season with just 3 assists. Raphinha’s expected assists tally alone merited 7 assists at least (6.8 xA). It’s a good argument that alongside a better finisher Raphinha will be troubling the assist charts as well. This is precisely what his suitors are banking on. 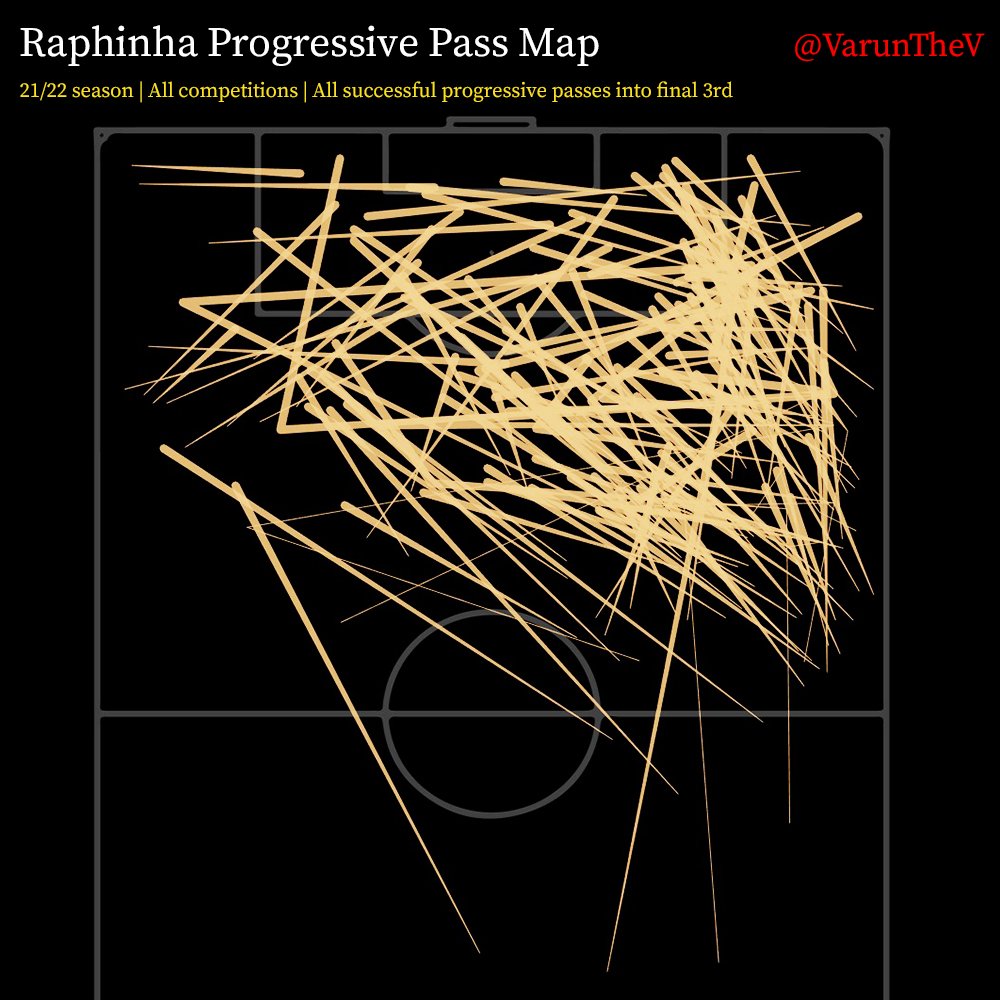 His high technique levels ensure he is able to find players in a very wide range. Again, it would be easy to assume that as a right winger who likes to cut in, he might be favouring just a few special areas on the right and certain angles to progress. But Raphinha is a lot more talented than that. Whether it’s down the line, an angular ball across the pitch or a diagonal into the box, he has a wide array of passes that can progress the game from different positions on the pitch. The whole pitch is his playground and it shows in his progressive pass map. You can’t ask for more variety and numbers from a winger.

Raphinha has been Leeds’ go-to man this season, whether it’s scoring, progression or chance creation. He has done everything an attacker can for a troubled side. The main reason why top clubs are pining for him is because his right winger movement is very desirable and he has the movement and technique to dribble, shoot, create and progress the game in equal measure. A well-rounded consistent attacker, Raphinha finished this season with 14 goal contributions. For a top side, that number increasing to 25 while ensuring progression and teamwork, is a no-brainer. Leeds would be very lucky to hold onto him for another year. They should consider themselves lucky they enjoyed his brilliance for 2 years in the first place. Final verdict: Leeds’ player of the season, by a mile.