Leeds have today (28/02/22) appointed American Jesse Marsch as Marcelo Bielsa’s successor. It’s a day no Whites fans wanted to see but the focus for the club now is on staying in the Premier League with 12 games to go. Marsch was sacked by RB Leipzig in December after just four months in charge at the German club – winning five of his 14 games in the Bundesliga. This has understandably caused concern among Leeds fans, especially given Leipzig have risen from 11th to 4th since his exit.

Who is Jesse Marsch?

Prior to his appointment in Germany, Marsch was building an impressive CV. He started out as the USA assistant manager in 2010 before becoming head coach at Montreal. He moved on to New York Red Bulls, then becoming assistant to current Manchester United boss Ralph Rangnick at Leipzig after five years in the American capital. In the summer of 2019, Marsch became manager of franchise partners RB Salzburg in Austria, winning back-to-back titles and losing just seven league games across two seasons. Though impressive, Salzburg have dominated in Austria for some years now and their title wins were expected given their financial power. Marsch was appointed manager at Leipzig prior to this season but he failed to make it to the second half of the season.

The talk among Leeds fans now is whether their new American manager has the ability to implement his style on the team quickly enough to keep them in the Premier League with just 12 games left. Though the Whites have a favourable run of fixtures coming up, their current form has them heading back to the Championship after just two seasons back in the top flight. It would be devastation for the West Yorkshire outfit who were out of England’s elite competition for 16 years after suffering relegation in 2004. Owner Andrea Radrizzani has taken a huge risk in replacing Bielsa with Marsch, especially with the former still a huge favourite with the Leeds players despite their recent slide down the league. Marsch has no Premier League experience and is tasked with shoring up the Premier League’s worst defence, while also having to boost an attack that has misfired of late despite Bielsa’s attacking tactics. Sitting just two points above the drop zone with teams below having games in hand, the pressure will be on the American from the get-go.

The first thing to note is that this will not be an easy adaption for a set of players who have become accustomed with just one way of playing. The infamous man-marking system will be scrapped, though a high intense, high pressing game will be used in a similar way to Bielsa, with a focus on closing down the space rather than the man to force mistakes. Marsch also likes to give sufficient cover for his defence with two holding players, which will likely be used in a 4-2-2-2 system which given the personnel he has available, could also be viewed as 4-2-2-1-1. In his title-winning seasons in Austria, Marsch used this 4-4-2-2 formation to devastating effect. We’re not likely to see the three-at-the-back system which ended Marsch’s tenure at Leipzig, though don’t be surprised to see this used in the future against certain teams. He likes to adapt to what the opposition has, press at the right times and win the ball back high up the pitch with a counter-press, akin to that Jurgen Klopp uses at Liverpool. The aim is not to win the ball back and keep it, but to win it back and score.

Then we come to the players. Robin Koch was signed as a centre-back but has primarily played as a defensive midfielder during his time at Elland Road so far. Given Marsch likes to play with two holders but is keen to win the ball back with short sprints from quicker players, Stuart Dallas may be used in a deeper midfield role alongside Adam Forshaw, with Koch moving to centre-back. In the final third there is an emphasis on sprinting to close down your man, which could see the more aggressive players out of possession favoured. We’re predicting bold changes in personnel in the final third of the pitch to suit Marsch’s style. Though Jack Harrison has struggled in recent weeks, he is likely to keep his place on the wing due to his work off the ball, with Dan James likely to be moved out wide to the other wing due to his struggles up front. Raphinha may be the big mover to the no.10 role in behind Joe Gelhardt, with the 19-year-old potentially set to be unleashed on a more consistent basis. This will give Leeds four aggressive sprinters in the final third, complimented behind by Forshaw and Dallas, with further emphasis on pressing ‘all-together’ at the same time. It also means that when the ball is won back then there are more creative players available to receive the ball in front of goal to score quickly, in particular Raphinha who could thrive in a more central position given the team’s struggle to convert chances of late.

The key to survival

Marsch focuses on timing. Though the emphasis is on everyone pressing together, this doesn’t mean it will be every time the opposition has the ball. The moments to press will be calculated, often when the opposition looks vulnerable. This allows for a more solid shape when the press isn’t triggered with everyone dropping into their set positions and defending the space. So, with this in mind, here is our predicted Leeds United starting 11 for Jesse Marsch’s first game in charge against Leicester City on Saturday lunchtime: 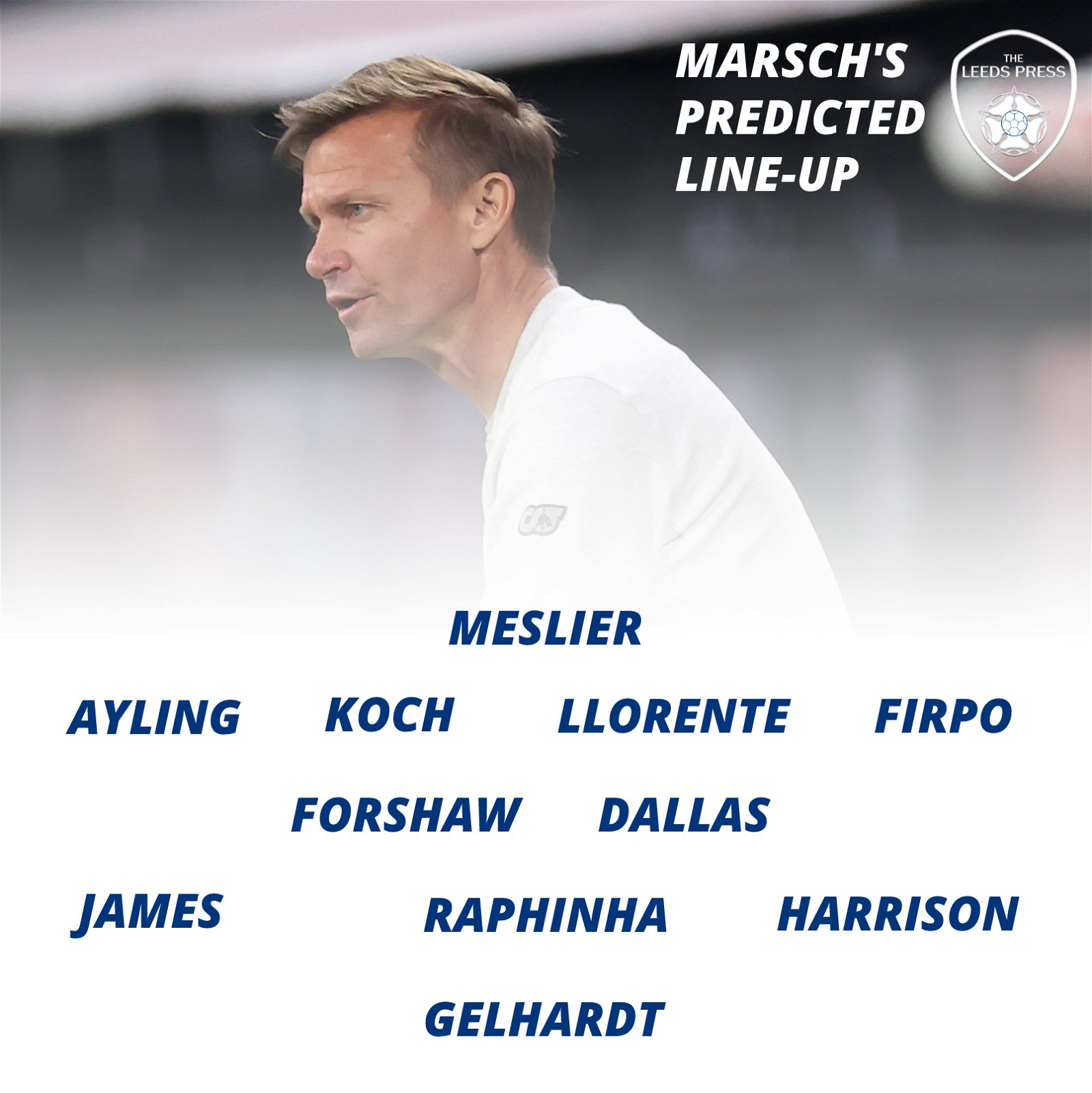 When the likes of Liam Cooper, Kalvin Ph0illips and Patrick Bamford return, they will obviously step straight into the team, but for now Marsch will likely opt for the most energetic players on offer to him. As mentioned, the key for Marsch is to sure up the defence, reduce the spaces around the pitch that were so evident under Bielsa, and make Leeds more clinical in attack. The Whites xG at both ends of the pitch is extremely high, but whereas their opposition capitalise on that, United themselves fail to take the majority of their chances in front of goal. That combined has resulted in Leeds having the worst defence in the league, and one of the worst attack, which has led to the relegation battle they currently find themselves in. The task for Marsch is clear but not straightforward to implement, and only time will tell if the players are able to adapt to his tactics. They have had nearly four years of Marcelo Bielsa’s unique, effective but ultimately self-destructive style of football – Leeds have 12 games to change their philosophy and results.