Pressing has been a strong buzzword around Leeds United for some time now. Ex-manager Marcelo Biela was a very big proponent of intense pressing and his core philosophy was largely based around that, the result of which saw great performances in the Championship, a return to the Premier League, a strong PL season followed by a poor one leading to his departure and a relegation battle for the club. It won’t be wrong to say that the high pressing theme being central to Leeds’ game is the reason for all of this. And the good (or bad) news is that a lot of that is here to stay after new manager Jesse Marsch’s takeover of the team.

Marsch once quoted in a Coaches Voice seminar: “As much as this is a difficult way of playing and it requires a big physical output, there’s a contagiousness to the feeling of overwhelming the opponent by outrunning them, by pressing them, by giving them no time on the ball.”

While his core philosophy does differ from Bielsa’s to some extent, he is again an advocate of pressing high and believes a strong pressing display is integral to winning. This is consistent with the Red Bull school of thought which originates from Ralf Rangnick and has been executed successfully by many managers especially in the Bundesliga and some in the Premier League as well like Ralph Hasenhuttl.

For the time being, we take a look at the 21/22 season data to understand how Leeds have been pressing so far. Most of this is thanks to Bielsa’s tactics with Marsch accounting for only the last few league games but the intentions, at least in terms of pressing, are similar, so the analysis still holds merit.

Leeds are among the best pressers in the league 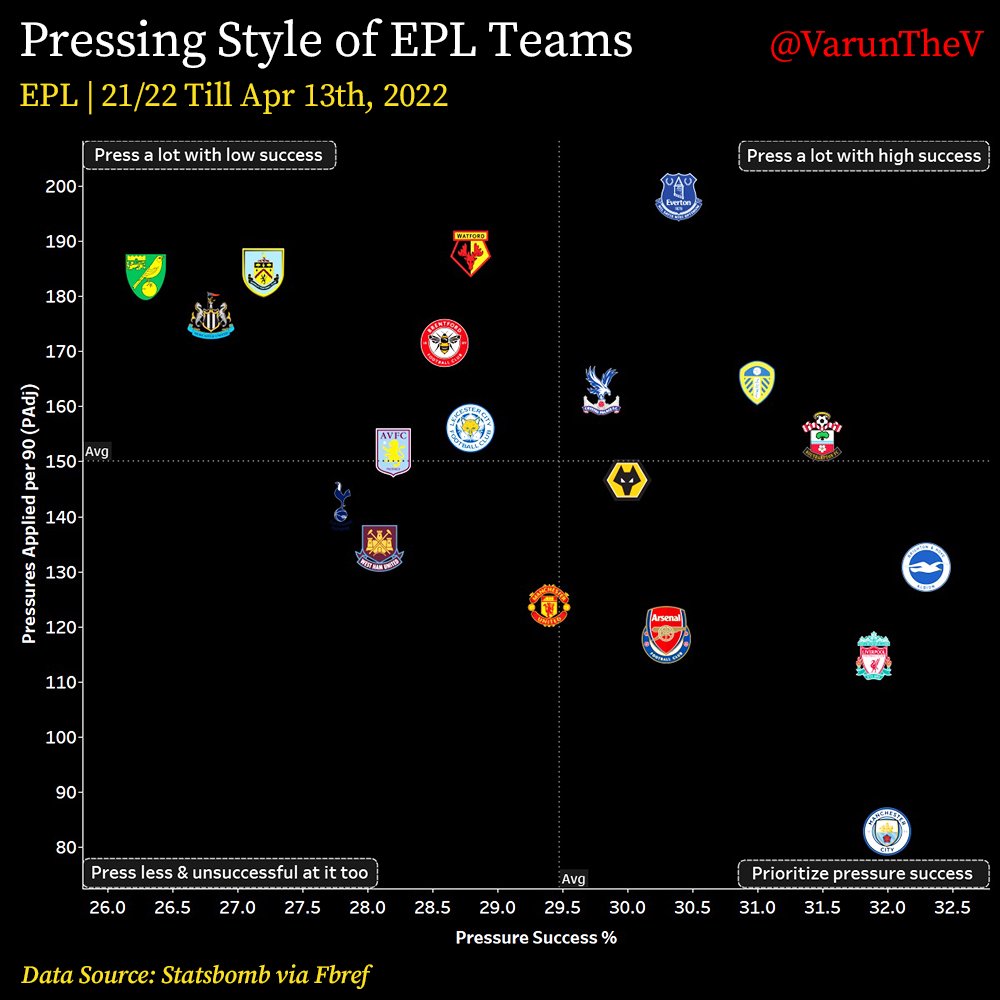 In this graph, I plot Pressures Applied per 90, adjusted for possession, versus Pressure Success %. The top-right consists of teams that not only press a lot when they don’t have the ball, but also boast a high success rate while doing so. They can be understood as teams that are trying to build a philosophy around a high press and have been largely successful at it. The good news is that Leeds United appear in this bracket. Leeds are in the top 5 for pressure success and in the top 7 for pressures applied. Even in a season when results have not been up to the mark, the pressing has been consistent and effective.

The other teams in the top-right zone like Southampton and Palace have also been adopting a high pressing system and seen success from it. The bottom-right teams prioritise pressure success over high pressing. These are teams that focus more on keeping possession, retention and constraining the pitch to win the ball successfully instead of opening themselves up with reckless pressing. As expected, most of the top teams fall in this bracket since they have the technically sound players who can deliver that level of retention and finesse. The top-left contains teams that are pressing a lot but struggling to see success. These are largely the bottom-half teams that are struggling to impose themselves on the game in terms of pressing.

The Leeds midfield is where it all happens 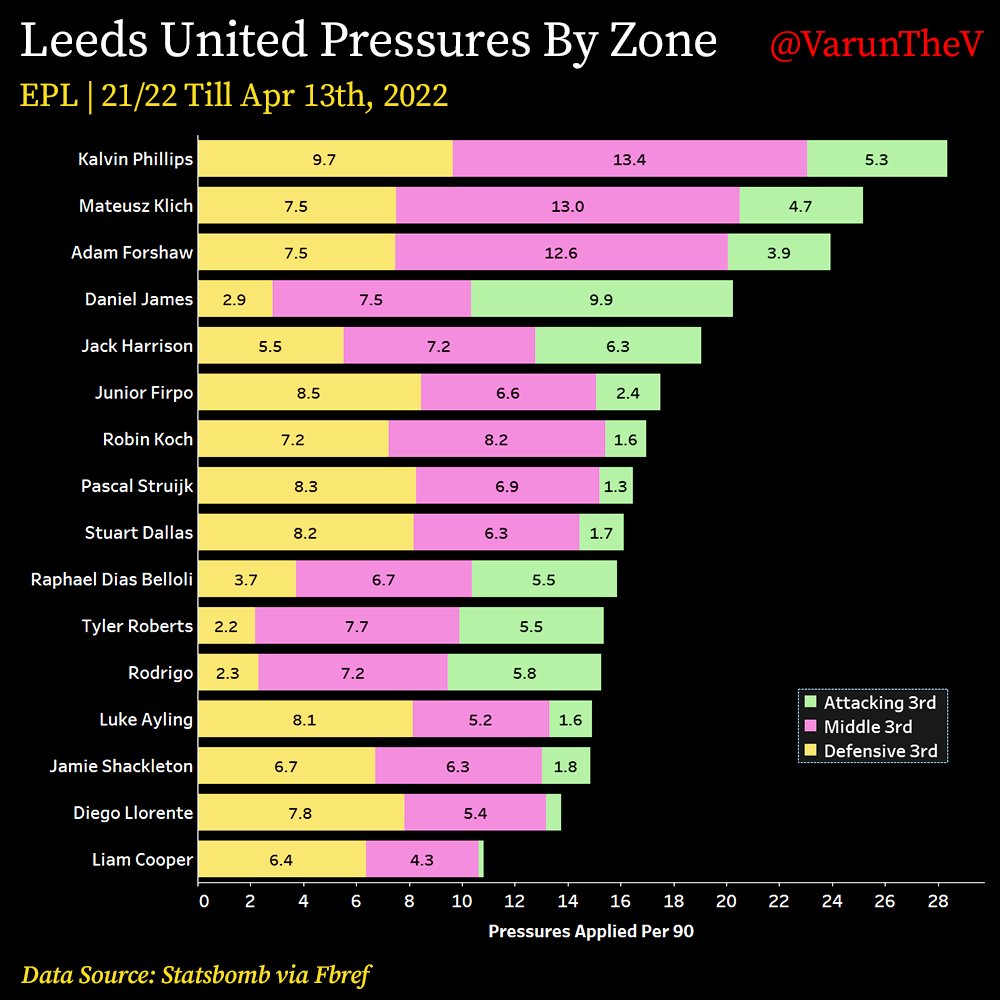 Next, we take a look at the pressing patterns of all Leeds players. This graph contains players who have played at least 7 90s this season and splits their pressures per 90 by zones on the pitch – attacking third, middle third and defensive third.

Anyone who has been watching Leeds consistently would have guessed the person with the most pressures applied. Kalvin Phillips sits at the top with most pressures in the middle third and defensive third for Leeds this season. In terms of overall pressures, Kalvin also boasts the 2nd most pressures applied in the Premier League. His 28 pressures per 90 is just behind Wout Weghorst’s 32. Among midfielders alone, Kalvin ranks in the top 5 in Europe. It’s not wrong to say that he’s a world-class presser.

The midfield duo who had largely deputised for Kalvin Phillips, when he was injured this season, are the ones who apply the next most pressures in the squad. The Leeds midfield is where the team’s pressing intensity largely originates from and is probably the biggest reason the squad appeared in the top-right quadrant in the first graph. Next on the list is new signing Daniel James. While there are many aspects of his game James has still been unconvincing about, his workrate and pressing have been appreciated by Leeds’ fans. He ranks the highest for attacking third pressures which makes sense given how he has featured as striker for most part in his short Leeds career so far.

Most of the centre-backs dominate the bottom of the chart for obvious reasons. You don’t want your central defenders pressing and vacating space. If there are nitpicks to be made, in what has largely been an impressive pressing effort by the squad so far, then those can be in the forms of Rodrigo, Tyler Roberts and Raphinha. For the roles they play, you would expect them to support the midfield effort. Their gaps are probably being covered by the impressive 3 at the top. But Raphinha and Rodrigo also stay higher up the pitch to be involved in chance creation and scoring, so they probably have that get-out-of-jail card.

In summary, for better or worse, Bielsa’s philosophy has ensured that the team is a high performance unit in terms of pressing intensity and efficiency. While that may also be the reason the wheels fell off this season, causing multiple injuries and the team to become defensively too open at times, the squad largely sits in the positive zone for pressing efforts. Jesse Marsch, being someone who relies on the high press, will be happy to know that he has some aspects to build on and if the upturn in form in the last 4 games is anything to go by, he is probably already doing so. If he can guide the club to safety and use the summer to work on the already good pressing structure the team is used to, that’s one less thing to worry about for Leeds United in the near future.